This is the on-line catalogue of Boekie Woekie, the artist-run bookstore for books by artists in Amsterdam.

Click here to see a 360 degree panorama of the bookstore, scroll down on this page for a brief history.

If you want to leave cyberspace and really visit us you can do that at:

(See below for a map. A circle near the lower left corner indicates where Boekie Woekie is situated.. A red arrow points to it.)

The bookstore and its gallery are open daily from 12 to 6 pm.


You can also reach us by phone/fax: -31-(0)20-6390507 or by e-mail: boewoe@xs4all.nl. If you like to receive our newsletter please click here and ask for it. You'll get then by e-mail our informations about new publications and events before they appear on www.boekiewoekie.com.

The titles of this catalogue are in alphabetical order by their authors,
or in cases of titles having more than one author, it's the title which is
listed alphabetically.

Of some of the items only single copies may be available.
It is mentioned if an item is not in good order. But feel free to ask about its condition. 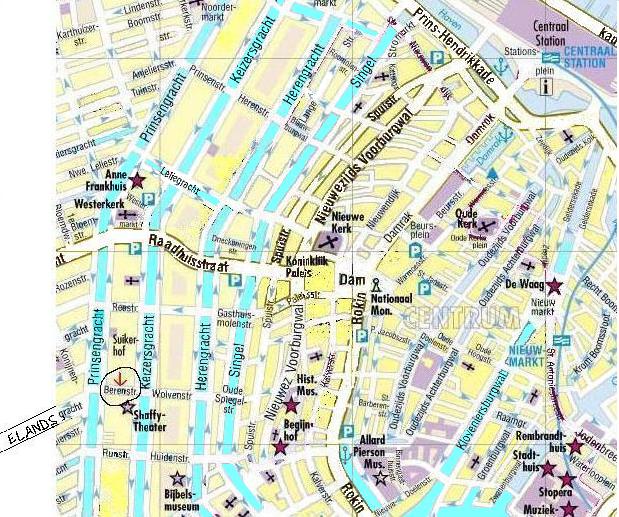 Boekie Woekie, books by artists, began paying rent for a tiny space in downtown Amsterdam on January 1st, 1986. It was then seen by its 6 founders (artists from 3 countries living in ) as a shop for their own publications. After the first 5 years and some reshuffling of the group and with 3 of the founders left, Boekie Woekie began its second phase in a quite much bigger shop space around the corner and with a renewed concept resulting from the gained experience: the new shop opened for publications by others. There are now about 7000 titles - almost exclusively self-published or small press books. Those who run it - Henriëtte van Egten (Dutch), Rúna Thorkelsdóttir (Icelandic) and Jan Voss (German) have continued their personal artists’ careers and since years count the shop itself as a sculpture in progress they work on concertedly. A small gallery space has belonged to Boekie Woekie from the beginning. There never came a stop to very small scale publishing (3 or 4 titles a year) which has led to the yearly participation in one or two book fairs (Frankfurt, London, New York). The entirely self-financing enterprise is Europe’s, if not the world’s, venue for artists’ books the longest in existence which carries books regardless to their author's fame.